Fanfiction
All are Arashi based

Hard Shoes (Complete)
Pairings: Ohmiya, (some Sakumiya)
Rating: PG13
Genre: AU/ Drama/ Romance/ Dancing
Summary: Ohno is a professional ballroom dancer. He teaches at his own dance studio, but it's in danger of going out of business. The only way he can restore it is by winning at a dance competition, but his long-time partner bailed out on him. One day, Ohno comes across Nino, a street performer who has the making of becoming a great dancer. The only problem is that Ohno has to teach Nino how to do ballroom dance. It's a story about trust, equality, and learning to walk in another person's hard shoes.
Chapter 1 - Ball Change
Chapter 2 - Sugar Push
Chapter 3 - Spotting
Chapter 4 - Close Position
Chapter 5 - Backleading
Chapter 6 - Contra Dance
Chapter 7 - Ballet d'action
Chapter 8 - Shadow Position
Chapter 9 - Freestyle
Chapter 10 - Coda Final Chapter

My American Daughter (Complete)
Pairings: Ohno and Kawashima Umika (it's not romance. It's a family relationship)
Rating: PG
Genre: Family/ Drama
Summary: Ohno decides to adopt a child as a promise for his deceased wife. He filled out the forms to adopt a Japanese child from America only to realize he adopted a 17 year old and not a 7 year old!
Prologue
Chapter 1 - Meet My Daughter
Chapter 2 - Trust Me
Chapter 3 - You Never Leave Home
Chapter 4 - This is Your Home
Chapter 5 - The Best Dad Ever Final Chapter

Akuma kara Tenshi E ~ From Demons to Angels (RE-EDITING. LINKS WILL NOT WORK)
Pairing: Naruse x Shiori, Sakumoto, Sakumiya, little Ohmiya
Rating: PG13 - NC17
Genre Supernatural / Mystery / Romance
Summary: Naruse and Serizawa are back but as Angels. They decided to see Shiori one last time, but they witness her having another vision. Someone is impersonating Amano Makoto's murders. The same express delivery, the same red letters and tarot cards. The same method. Who is behind all this?
Warnings: This story contains rape, violence, blood, character deaths, and murder.
Prologue
Chapter 1 - The Target
Chapter 2 - The First Victim
Chapter 3 - Angel Lore
Chapter 4 - Sacrifice For Knowledge
Chapter 5 - Pride and Lust
Chapter 6 - The Lovers
Chapter 7 - Rain Maker
Chapter 8 - From Demons to Angels Final Chapter 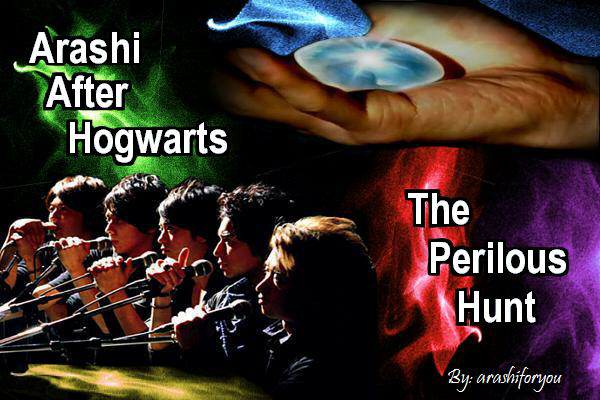 Vocaloid Love (Author Recommended!)
2 parts!
Pairings: Sakumoto (main)/ Sakurai Sho x Ikuta Toma (one-sided)/ Ohba (friendship)
Rating: PG13
Genre: Romance/ Hurt+Comfort/ some comedy
Summary: Johnny & Associates created a new service for their fans: an 24-hour call service of highly advanced vocaloids that sounds identical to their idols. Business begins booming. Fans are estatic with the new fan service (not to mention the extra cash for the company). One day, Sho got a little curious and gave a call to a vocaloid Jun. But he's slowly becoming too attached.
Notes: For

View Count
2 parts!
Pairings: None (but some implied Sakumiya and Ohmiya)
Rating: R
Genre: Suspense/ Mystery
Summary: Jun meets a mysterious man at a bar and signs a contract to live in a share house, but what Jun doesn't know is that he signed his life away to a death game. Now, Jun and nine other contestants must survive a cruel game that is streamed live for internet users all around the world. Their means of survival: don't lose viewers.
Notes: For the

"Show" Business
2 parts!
Pairings: Sho x Arashi (Part 1: Sakumiya, Sakumoto. Part 2: Yama, and Sakuraiba)
Rating: NC-17
Genre: Smut/ AU
Summary: Kitagawa Johnny imposed a new agency law on his idols: no sexual intercourse with others whatsoever. Naturally, all the Johnny's members were furious, but they're completely helpless now as they're being carefully monitored. Sakurai Sho couldn't stand for such a senseless rule, so he offered his service to his colleagues in a secret business...for a price.
Notes: For

The Swan Prince (Author Recommended!)
4 parts!
Pairings: Sakumiya
Rating: PG (with optional NC17 scenes)
Genre: AU/ Romance
Summary: In an AU setting, Yamada Taro and Mimura Takuya are in fact princes of a faraway land. Unbeknownst to them, a powerful sorcerer kidnapped Mimura and changed him into a swan. Only the power of everlasting love can break the spell.
Note: Based on The Swan Princess
Part 1
Part 2
Part 3
Part 4 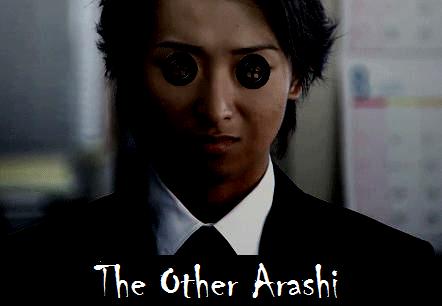 The Other Arashi (Author Recommended!)
2 Parts!
Pairings: General
Rating: PG13
Genre: Horror
Summary: The agency decided to make Arashi's next PV at a secluded mansion in the mountains that had the perfect setting. Arashi has to stay for three days at the mansion, but Jun discovers horrifying secrets about the place.
Note: Based on the book/movie Coraline
Part 1
Part 2

The Temptation of Dark Hearts
2 Parts!
Pairings: Sakumiya
Rating: R
Genre: Mystery/ Romance/ Slight Fantasy
Summary:  Nino is married and a loyal detective for his country. His wittiness and great sense of logic help him solve any case, until he was invited to play a game with Sakurai Sho.
Note: For The Black Wolf (Author Recommended!)
4 Parts!
Pairing: Ohno/Jun Ohno/Nino
Rating: R
Genre: Drama/ Suspense
Summary: A young and talented dancer auditioned to a popular stageplay and became the lead role. But the demanding part slowly took its toll, bringing the dancer in touch with his dark side and destroying his life.
Note: Based on the movie "Black Swan"
Part 1
Part 2
Part 3
Part 4

Inner Demons
Pairing: Ohmiya (not romantic)
Rating: R
Summary: Nino had gone missing and was later found dead. While filming the final episode of his new drama, Ohno is determined to find out who killed his best friend.
Note: For

Sleep Paralysis
Pairing: Sakumiya, some Sakumoto
Genre: Horror
Rating: NC17
Summary: Nino has been hallucinating before he falls asleep, and his nightmares are growing more vivid and frightening. One night, he dreamt of a man staring at him from the foot of his bed drawing closer and closer. However, it wasn't a dream at all. Whatever you do, don't open your eyes.
Note: For

je_trick_or_fic event. This fic can be disturbing and gruesome. Has character deaths. Not for the faint of heart.

My Guardian Angel (Author Recommended!)
Pairings: Yamada Taro x Mimura (Sakumiya)
Genre: Romance/ Fantasy/ Angst
Rating: PG13
Summary:  A year has passed since Yamada Taro and Mimura Takuya graduated from high school. Nothing has changed for Taro, except that demons are after him. Mimura must protect him with the help a few new awaken powers, but something happened between them that has made things awkward, and Mimura can't understand why.
Note: For

Para-Ohno-man
Pairings: Ohno and ghosts/ Ohmiya
Genre: Humor/ General
Rating: PG
Summary: The reason why Ohno appeared fearless in the Haunted House episodes is not because he was sleepy. He's not afraid because he sees ghosts on a daily basis.
Note: Inspired by a Tumblr confession post

Red String of Fate (Author Recommended!)
Pairings: Sakumoto
Genre: Romance/ Drama
Rating: PG13
Summary: Jun is having amazing realistic dreams of him and Sho as a teacher and a student. With such a luring and forbidden love blossoming in his sleep, it's tempting Jun to confess one more time.
Notes: Took part in

Like Strangers
Pairings: Ohmiya
Genre: AU/ Drama/ Friendship
Rating: PG13
Summary: Nino meets his old childhood friend Ohno after so many years, but Ohno is keeping a dark secret from Nino.
Notes: for

My Life is My Message (Author Recommended!)
Pairing: Sakumoto
Genre: AU/ Drama/ Romance/ Angst
Rating: PG
Summary: The year is 2017. Sakurai Sho is a famous novel writer and singer, and the youthful college student Jun is his biggest fan and apprentice. One day Sho asked him one favor, "You must stop me from writing." Suddenly, Jun is sent back in time to the year 2007. Whatever could Sho mean?
Notes: for

I'm An Ohno-aholic...
Pairing: OhnoxEveryone that pairs with Ohno! XD
Genre: Crack/Humor
Rating: PG
Summary: The boys in Johnny Associates that suffers a terrible obsession, gathers together to help overcome...Ohno-aholic.

Getting Back At Nino
Pairing: Ohmiya, slight Sakuraiba
Genre: Horror/ Drama
Rating: PG13
Summary: Arashi is fed up with Nino and his pranks. It's pay back time! On Halloween night, they plan the ultimate scheme, but is there prank a bit too much?

Victory is Ours!!
Pairing: Sakuraiba, little Ohmiya
Genre: Comedy
Rating: PG
Summary: The Battle of Pop semi-finale results are finally in! Aiba thought he was the only one keeping check, but the members have a few confessions.

Saynonara, Arashi
Pairing: ArashixArashi
Genre: Drama/ Friendship
Rating: PG
Summary: It has been 60 years since Arashi debut in Hawaii. They all knew what it meant when President Johnny Jr. himself called them to his office. They knew, and they were ready. It's been fun...

Latest Drabbles/ficlets can be found at my AO3 account

Four Times Ohno Makes Drunk Calls, One Time Nino Did Too
Pairing: Ohmiya
Rating: PG13
Genre: Humor/ Slight Angst at the end
Summary: Ohno makes drunk calls to Nino four times in a row, and Nino has to sit through each call listening to different types of "drunk-Ohno". Then one night, Ohno gets a drunk call from Nino...
Author Notes: For Dia (sexual-savanna) as a Christmas gift!
Four Times Nino Asks for Nude Pics, One Time Ohno Did
Pairing: Ohmiya
Rating: NC17
Genre: Humor/ Smut
Summary: After being committed into a relationship, Nino tries to take it up a notch and asks Ohno for nude pics. Only Nino never realized how dense Ohno can be.
Author Notes: For Dia (sexual-savanna) as a Christmas gift!
Happy Birthday Aiba!
Parings: Varies with Aiba pairings
Rating: PG-PG13
Genre: Varies
General Summary: A 28 collection of drabbles in celebration of Aiba Masaki's 28th birthday.

Leaving Vancouver
Pairings: None
Rating: G
Genre: Drama
General Summary: Sho leaves for Japan after his work for Winter Olympics with fans cheering him on...

Arashi with Inoue Mao
Pairings: Varies with Mao (because she goes well with them) ><
Rating: PG
Genre: Varies
General Summary: After watching Himitsu no Arashi and Arashi no Shukudai-kun with Inoue Mao, I got the urge to drabble Mao-chan with Arashi. They go together well!

Maou - Si Deus Me Relinquit
Watch on my Tumblr

Arashi Got Us Falling In Love Again
www.youtube.com/watch

Ohno Satoshi - In My Head
www.youtube.com/watch

Collab Work
Ohmiya - You Belong With Me (Punk Cover)
http://www.youtube.com/watch?v=ibM5KdDH0cw